From Straight Outta Compton and Ingrid Goes West to Just Mercy, O'Shea Jackson Jr. has had to shape his own acting identity.

June Picks: Movies and TV Shows You Can't Miss
a list of 11 images
updated 7 months ago

Editors' Picks: Our Favorites From the Week of March 3
a list of 10 images
updated 10 months ago

Search for "Late Night" on Amazon.com

What Is Mindy Kaling Watching? 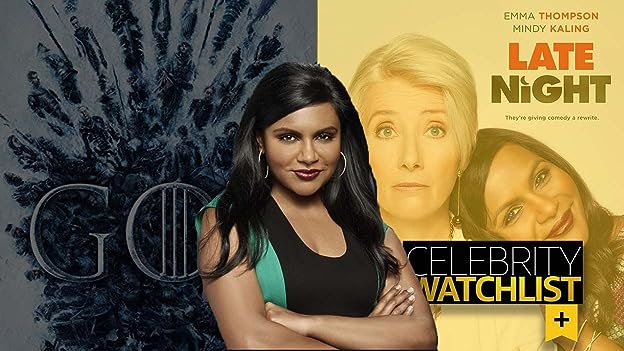 The Late Night star's Watchlist is filled with HBO shows, a Quentin Tarantino classic, and even a competition reality show. Find out what she's watching and get ideas for your next binge!

A young woman decides to make positive changes in her life by training for the New York City Marathon.

A loving mom becomes compelled to reconnect with her creative passions after years of sacrificing herself for her family. Her leap of faith takes her on an epic adventure that jump-starts her life and leads to her triumphant rediscovery.

In England in 1987, a teenager from an Asian family learns to live his life, understand his family and find his own voice through the music of American rock star Bruce Springsteen.

A musical fantasy about the fantastical human story of Elton John's breakthrough years.

Katherine Newbury (Emma Thompson) is a pioneer and legendary host on the late-night talk-show circuit. When she's accused of being a "woman who hates women," she puts affirmative action on the to-do list, and --presto!--Molly (Mindy Kaling) is hired as the one woman in Katherine's all-male writers' room. But Molly might be too little too late, as the formidable Katherine also faces the reality of low ratings and a network that wants to replace her. Wanting to prove she's not merely a diversity hire who's disrupting the comfort of the brotherhood, Molly is determined to help Katherine revitalize her show and career--and possibly effect even bigger change at the same time.

They're giving comedy a rewrite.

There are multiple mentions of Katherine publicly discussing her clinical depression. This plays on the real life occurrence of Emma Thompson discussing her depression following her split from Kenneth Branagh See more »

The microphone on the talk show host's desk is a Shure Super 55. In every scene, it is pointed down at her desk, rather than at the host. See more »

Walter Lovell: The thing is you can't take away one terrible thing you did any more than you can take away the millions of beautiful things that we had together. That's a million to one. If you can live with that ratio for another few years, then so can I.
See more »

I am not sure where all the negative reviews are coming from, although I am not sure where all the 10's are coming from. I went to,the movies with my wife to see an adult movie. No superheroes, no CGI. This was a quaint little movie. The acting was fine. The story moved at a brisk pace and Emma Thompson was able to carry the movie as she was in most scenes. Felt that I got my money's worth.