PG-13 | 2h 5min | Action, Biography, Drama | 1 November 2019 (USA)
2:32 | Trailer
26 VIDEOS | 83 IMAGES
The extraordinary tale of Harriet Tubman's escape from slavery and transformation into one of America's greatest heroes, whose courage, ingenuity, and tenacity freed hundreds of slaves and changed the course of history.

Oscars 2020: Nominated Titles
a list of 38 titles
updated 4 weeks ago

Search for "Harriet" on Amazon.com

'Harriet' Cast Discuss the Role Music Plays in the Film 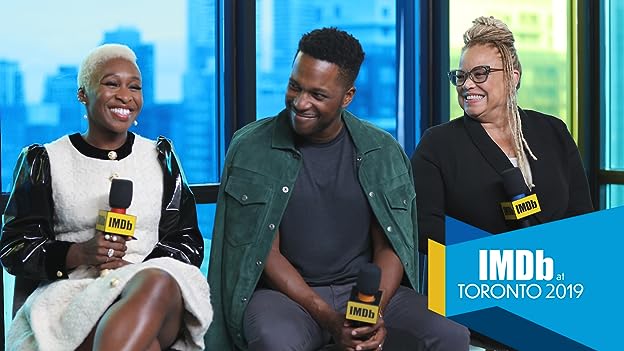 Based on the true story of a real-life friendship between Fred Rogers and journalist Lloyd Vogel.

The story of the Battle of Midway, told by the leaders and the sailors who fought it.

An embattled NYPD detective is thrust into a citywide manhunt for a pair of cop killers after uncovering a massive and unexpected conspiracy.

A long time ago in a distant fairy tale countryside, a young girl leads her little brother into a dark wood in desperate search of food and work, only to stumble upon a nexus of terrifying evil.

In 1950s New York, a lonely private detective afflicted with Tourette's Syndrome ventures to solve the murder of his mentor and only friend.

When a young systems engineer blows the whistle on a dangerous technology, Charlie's Angels are called into action, putting their lives on the line to protect us all.

American car designer Carroll Shelby and driver Ken Miles battle corporate interference and the laws of physics to build a revolutionary race car for Ford in order to defeat Ferrari at the 24 Hours of Le Mans in 1966.

Based on the thrilling and inspirational life of an iconic American freedom fighter, Harriet tells the extraordinary tale of Harriet Tubman's escape from slavery and transformation into one of America's greatest heroes. Her courage, ingenuity, and tenacity freed hundreds of slaves and changed the course of history. Written by Focus Features

Be free or die

PG-13 for thematic content throughout, violent material and language including racial epithets | See all certifications »

Both Vondie Curtis-Hall and Vanessa Bell Calloway were in Coming to America (1988). See more »

The Canadian city Harriet Tubman fled to was called St. Catharines not St. Catharine as shown in the text scrawl. See more »

Harriet: [to Gideon, at gunpoint] You'll die right here. On a frozen, blood-soaked battlefield, the moans of a generation of young men in your ears, dying in agony around you, for a lost cause. For a vile and wicked idea! For the sin of slavery! Can you hear them? God don't mean people to own people, Gideon! Our time is near!
See more »

1800's type photographs of the cast with their names in the credits. See more »

Q: Does anyone know if this movie will accurately portray Harriet Tubman's love of firearms?
See more »

I wanted to love it, but was disappointed
1 November 2019 | by bandblawrw – See all my reviews

I went in wanting to love it, ended up just waiting for it to be over. The best part to me was the closing scene and the written adlibs after. I really don't like disparaging works that show the history of Blacks in America, as our stories need to be told, but I was very disappointed. The lead did not evoke any compassion in me, and the villain was very unconvincing. Think about it, 12 Years a Slave and Django had you side-eyeing the actors that played the slave owners because they emoted so well. The lead villain, Gideon Brodess, God Bless him, didn't pull it off IMO. The fact that the best performances were the supporting cast, Leslie Odom as William Still, Clarke Peter as Harriet's father, Omar J. Dorsey (no spoilers as to role) and Henry Hunter Hall (no spoilers as to role) doesn't bode well for a film. Maybe the fact that they made Harriet 24, 25 instead of a mature woman? Maybe it was the dialogue that was written a bit "slick" for the time period? Maybe the inconsistencies with what was presented vs reality? Even Janelle Monae was just so so for me. Although I do not work in Hollywood, when there are that many failures within performances and only the veteran actors shine, it may be the director. I dunno, but I was disappointed. I would still support the film because we need Hollywood to know we want our stories heard/seen. Maybe if Viola Davis' project had gotten support, her version would have been better. She was going to star in and produce a biopic on Harriet Tubman for HBO, but it never happened. I would give it 5/10 stars.