Peter Straughan (screenplay by), Donna Tartt (based on the novel by)

Search for "The Goldfinch" on Amazon.com

How Sarah Paulson Transformed for 'The Goldfinch' 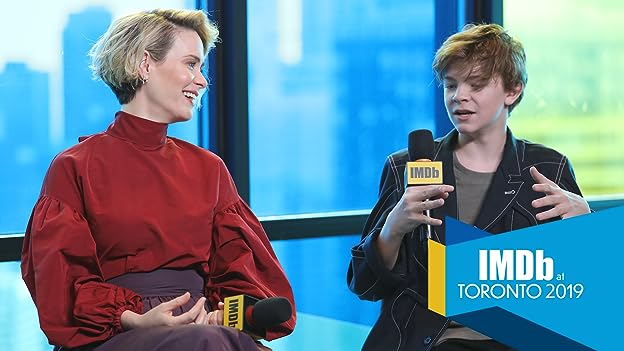 The Goldfinch stars Sarah Paulson and Oakes Fegley discuss their adaptation of the best-selling novel with host Dave Karger at IMDb at Toronto, presented by Intuit QuickBooks.

A loving mom becomes compelled to reconnect with her creative passions after years of sacrificing herself for her family. Her leap of faith takes her on an epic adventure that jump-starts her life and leads to her triumphant rediscovery.

In England in 1987, a teenager from an Asian family learns to live his life, understand his family and find his own voice through the music of American rock star Bruce Springsteen.

Balloon pilot Amelia Wren and scientist James Glaisher find themselves in an epic fight for survival while attempting to make discoveries in a gas balloon in the 1860s.

The continuing story of the Crawley family, wealthy owners of a large estate in the English countryside in the early twentieth century.

An ex-felon discovers a live baby left in a dumpster.

A married couple is forced to reckon with their idealized image of their son, adopted from war-torn Eritrea, after an alarming discovery by a devoted high school teacher threatens his status as an all-star student.

A young couple arrive in New York for a weekend where they are met with bad weather and a series of adventures and misadventures.

Zak runs away from his care home to make his dream of becoming a wrestler come true.

An over-the-hill hitman faces off against a younger clone of himself.

13-year-old New Yorker Theo Decker's life is turned upside-down when his mother is killed in a terrorist attack at the Metropolitan Museum of Art. Confused in the rubble of the tragedy, he steals a priceless piece of art known as The Goldfinch.

The Story of a Stolen Life

Rated R for drug use and language | See all certifications »

Q: What is the song in the trailer?
See more »

Many of the commenters here and elsewhere have been saying things like "Ignore the critics - it's a great film", and I went hoping that they would be proven right.

Alas, despite some fine acting from a few members of the cast (both Nicole Kidman and Sarah Paulson are excellent), the film cannot be recommended to those who, like me, were infatuated by the Donna Tart's novel. This seems to be due to the inherent tension between the screenplay's slavishly literal fidelity to the text, on the one hand, and to the choices it does makes (inevitably, given the book's sprawl), on the other.

Where it diverges from the novel, it does so in big and, I think, quite damaging ways (damaging, that is, to a film that presumably seeks to elicit the kind of intense involvement from its viewers that the book demanded from readers). One of these is the episodic, almost random way in which so many sequences seem to have been sliced, diced and glued back together in what seems to be no particular order. Too many of these sequences appear to be perfunctory -- brief exchanges of dialogue that serve only to fill in the backstory or to advance the plot line (assuming, under these circumstances that you can keep track of it), without any deeper meaning being conveyed by the acting or the cinematography. Much of the film thus plays like an extended trailer, edited to achieve specific effects without emotional or character-driven context. Even more damaging is the decision to portray the protagonist, Young Theo Decker, as younger than he is depicted in the book, in such a way that the Young Theo sequences are drained of much of their original meaning. In the book, Theo is portrayed as pubescent, and we are witnesses not just to events that he undergoes more or less passively, but to his sexual and emotional maturation. Oakes Fegley, the actor in question (who is not without talent - one could imagine him evolving into something along the lines of a Philip Seymour Hoffman), appears to be about that age, but, as is usual in American movies, the child he portrays is clearly meant to be younger. This unbalances and denatures his crucial relationship with Boris, the worldly-wise and thrillingly dangerous Ukrainian friend he meets in high school while exiled from New York to the outer fringes of Las Vegas. In the book, they are high schoolers; in the film, they appear to be more like middle schoolers, which distorts a lot of what is supposed to be going on. The film apparently got an R rating for its pervasive depictions of drug use and its brief episode of violence, but this is one of the ways in which, unlike the book, it stays far too safely - damagingly so - in PG-13 territory.

The leap from Young Theo to Young-Adult Theo (i.e, from Fegley to Ansel Elgort) is thus too abrupt to fit the story's time-scale. And, if it was the production team's intention to portray Young-Adult Theo as a twit (which, in retrospect, is a plausible reading of the book, though not mine), it succeeded beyond its wildest expectations. As a result, Elgort's all-too-transparently artificial emoting in the climaxes misses the mark - they never feel genuine and are, in some cases, downright embarrassing. A central character in a stem winder like this should, at the very least, have some charisma, but Elgort seems to have been told (and been costumed and bespectacled) to cool things down. Cooling seems to be the overall point, and it follows that the movie departs from the book in lacking heat.

Finally, a loud raspberry for the two Borises, Finn Wolfhard as Young Boris and Aneurin Barnard as the adult version. Both clearly had to expend a lot of effort on maintaining their would-be Slavic accents (which nonetheless slip in and out), to the detriment of their actual acting. No Russian or Ukrainian viewing this film is likely to believe in either character for one moment. This is customary in Hollywood, where the belief seems, absurdly, to be that dialect coaches can turn any actor into a credible linguistic clone. Far better to recruit genuine, in this case, Slavic actors (of whom there are plenty) and put the coaching resources into coaxing them into English intelligibility.

All these elements mean that I felt none of the involvement that had kept me glued to the book. Just as the critics had warned me.